This fix involves messing with a tube preamp running high voltage that can kill you. If you choose this path, do it at your own risk, I can’t be blamed! 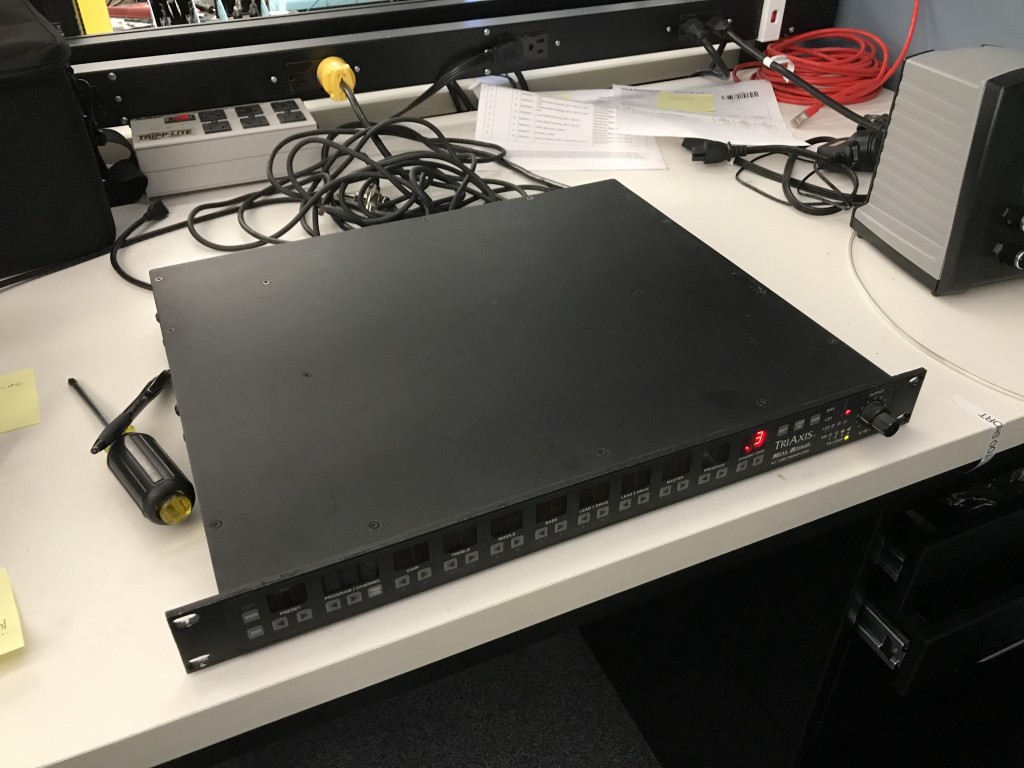 A colleague I’m sometimes playing the guitar with came to me the other night with his dying Mesa Boogie Triaxis. Apparently this famous preamp works fine for 15 minutes, before falling into error mode, displaying his inner pain on the front panel display through the mysterious message “.3” which, according to the doc, stands for “Err”.

A quick search on the net shows that this is quite a common issue, but I couldn’t find a concrete solution that doesn’t involve a $400 Mesa Boogie factory return.

Come on, a 90’s rack preamp should be easy to open and fix !

Here it is, laying on the surgery table, with all the care and concern of a tubes stuff guts (high voltage, afro haircut, death, and so on). 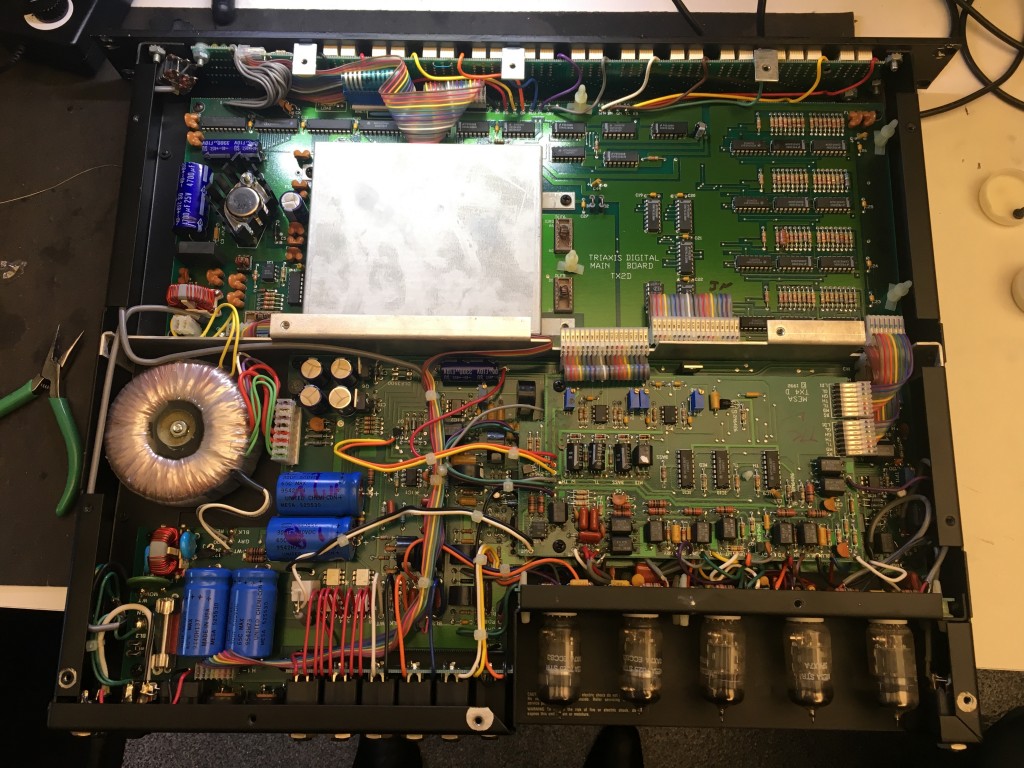 Without surprise, it’s designed to be opened and tweaked, so a first diagnosis is easy to get. But let’s be honest, a full disassembly will be a PITA. So let’s hope it won’t come to this.

Both symptoms and Internet comments (microcontroler failure, not serviceable) made me want to blame the digital part and not the analog part, so I focus on this.

At first sight, everything’s fine. Some tantalum caps that could be on their aging days, but nothing pops up. Let’s look under this Faraday cage that must protect microcontrolers from electric noise. 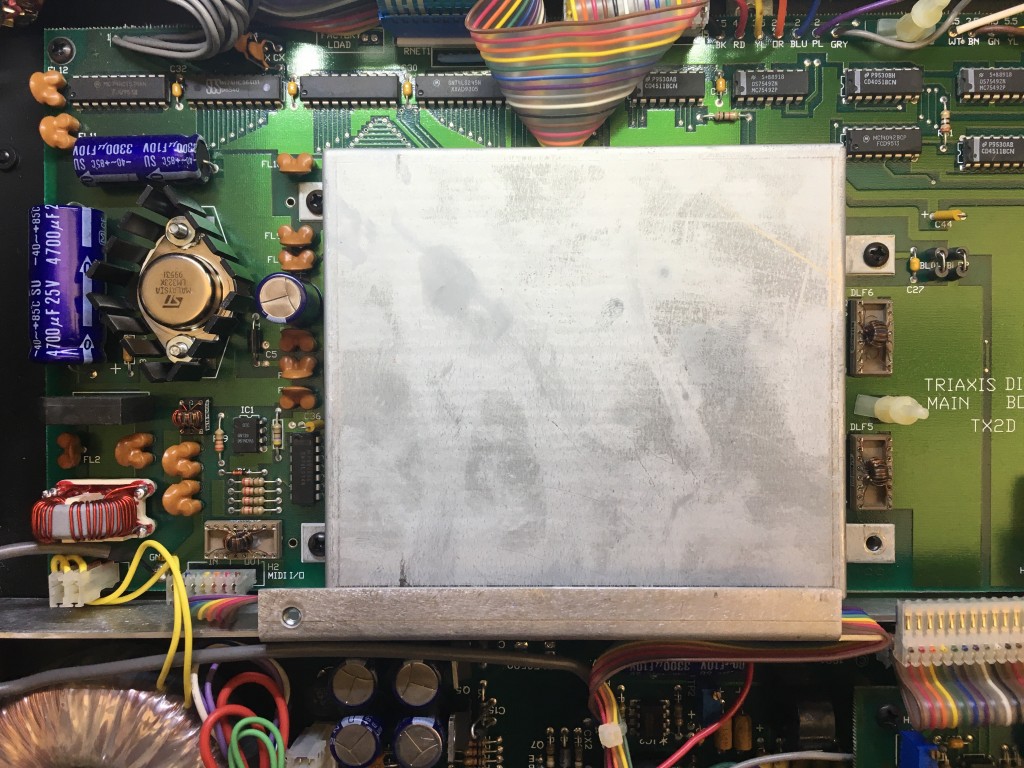 As expected, here are the Triaxis chip and some Z80, that I hope are fine. 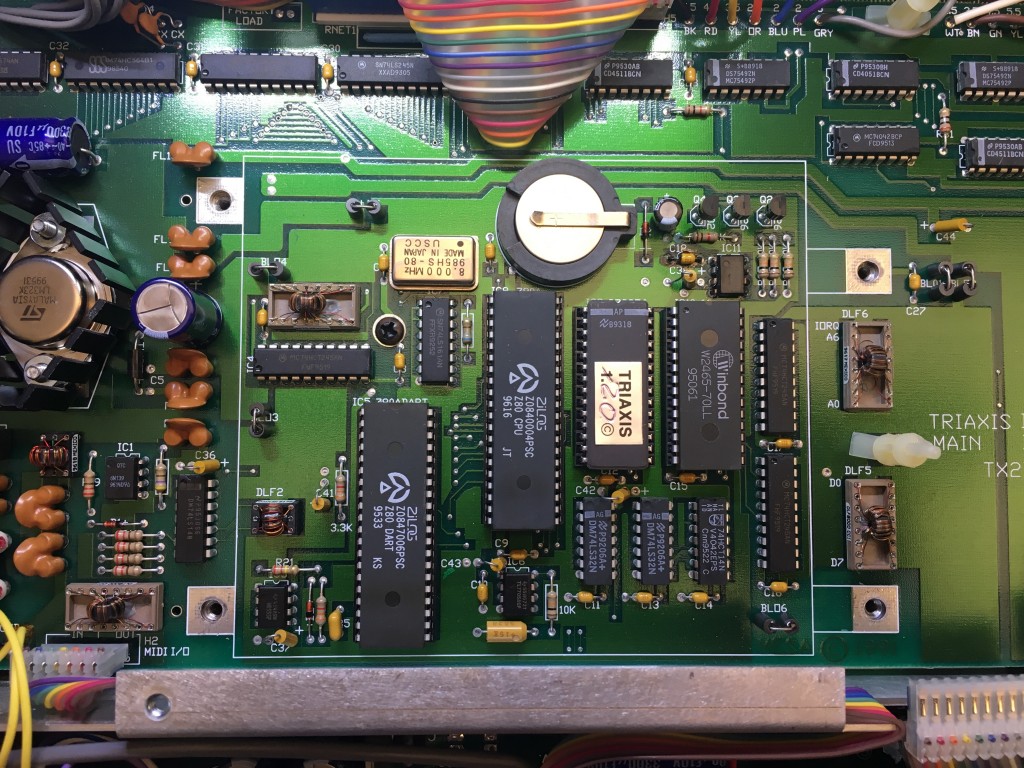 But having a closer look, there’s this C18 tatalum cap leaking, and IC11 dressed as a smoked rib. With a more chemical smell. That depends on the restaurant though. 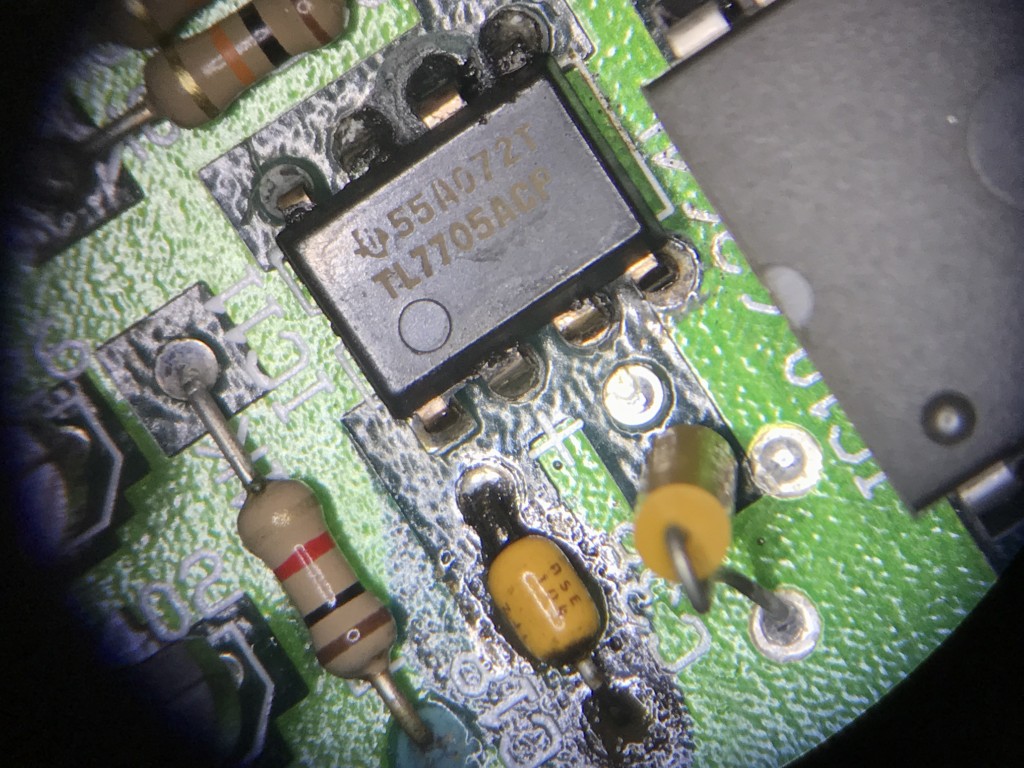 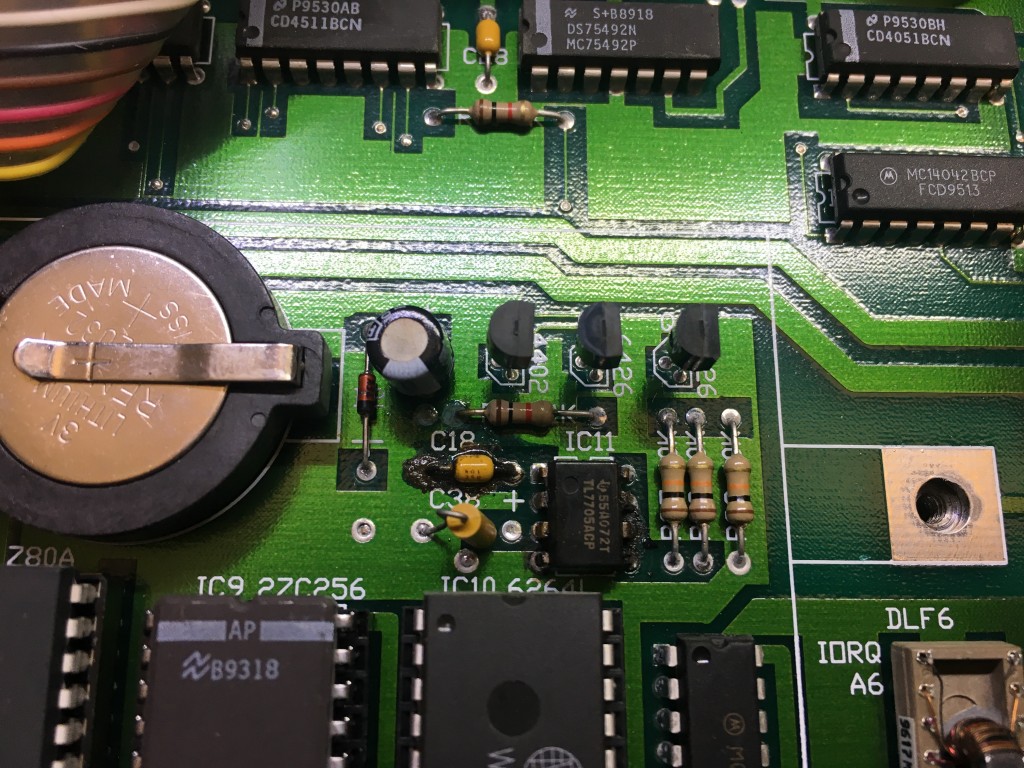 IC11 is a TL7705ACP, a supply-voltage supervisor, making sure that voltage is as expected before turning on other part of the circuit. If it goes beyond limits, it can be used to shuts things off or trigger errors. And the voltage of reference is decoupled by C18, the damaged capacitor. It’s thus very likely to trigger errors after a short period of time, which could explain the message on the front panel of the Triaxis!

Let’s order a new TL7705ACP and some 100 nF tantalum cap, even though a ceramic could do the job.

A few days later, parts arrived, and I call my colleague. Yeah, 40 minutes before my train, plenty enough of time!

I start by removing damaged parts. Simplest way to do it in my experience is to cut every pin, and then unsolder them one by one. Then I clean the leaks of cap juice and carbonized dusts. 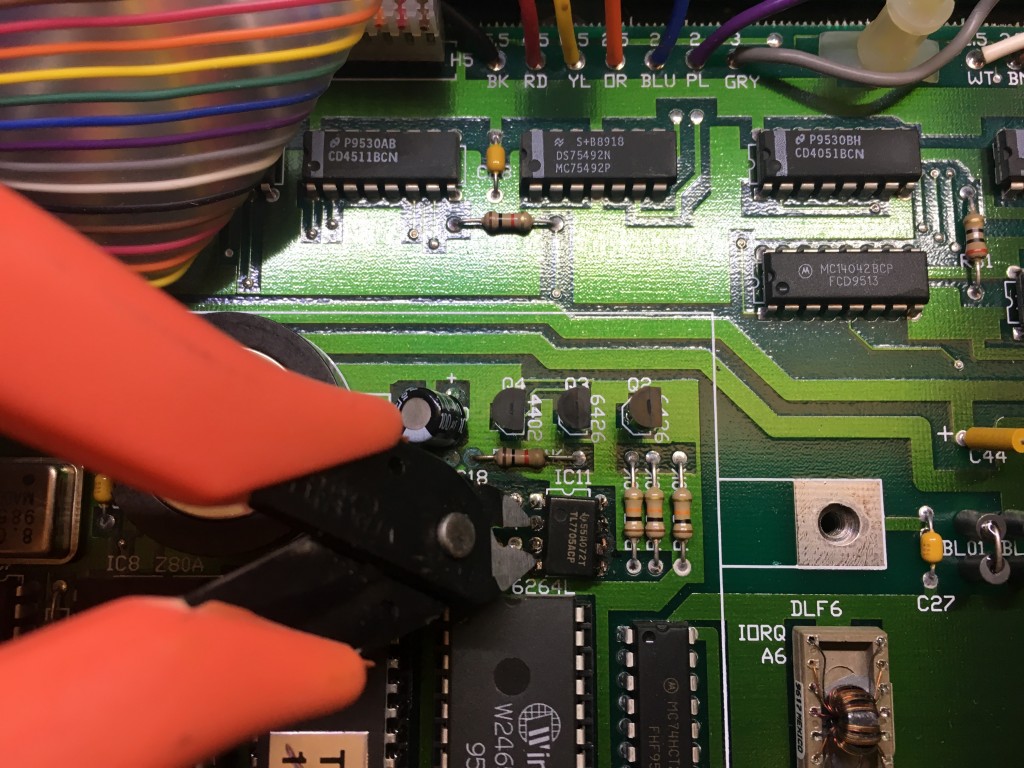 This part of the board is obviously burnt on several areas, so I don’t want to struggle and solder new parts directly. Actually I can’t because it’s hard to solder and can be damaged further. Pin 6 of IC11 in particular is just carbon at this stage, so I’ll connect it elsewhere on the circuit.

I check with a multimeter how everything is connected (GND, VCC, VREF, RESET…) and try to figure out how the part is used, based on the circuit reference from the datasheet. Again, I’m a little confused by how the RESET pin of IC11 is used, directly connected to ground. As the circuit is damaged here, I cross check my multimeter result with a visual inspection of the bottom layer of the board: that’s a match, so I’ll reconnect it like this, and will trust Mesa Boogie’s engineers (but if it was me I would have put a 10k resistor). 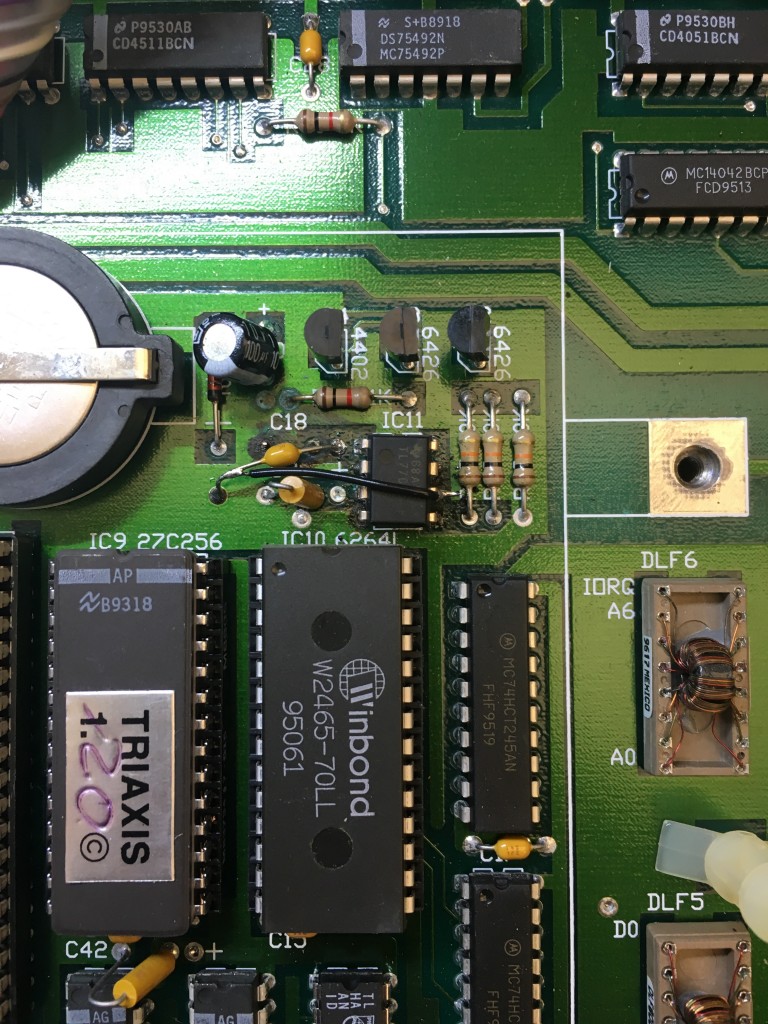 Visually, it’s ugly. Probably one of my worst fix, but that was fast and it avoided a full board disassembly. Anyway I can’t see any influence on sound or reliability, so who cares.

A few other checks with my trustworthy multimeter, and I plug the beast.

No smelly blue smoke, no heat, and no errors on display anymore! 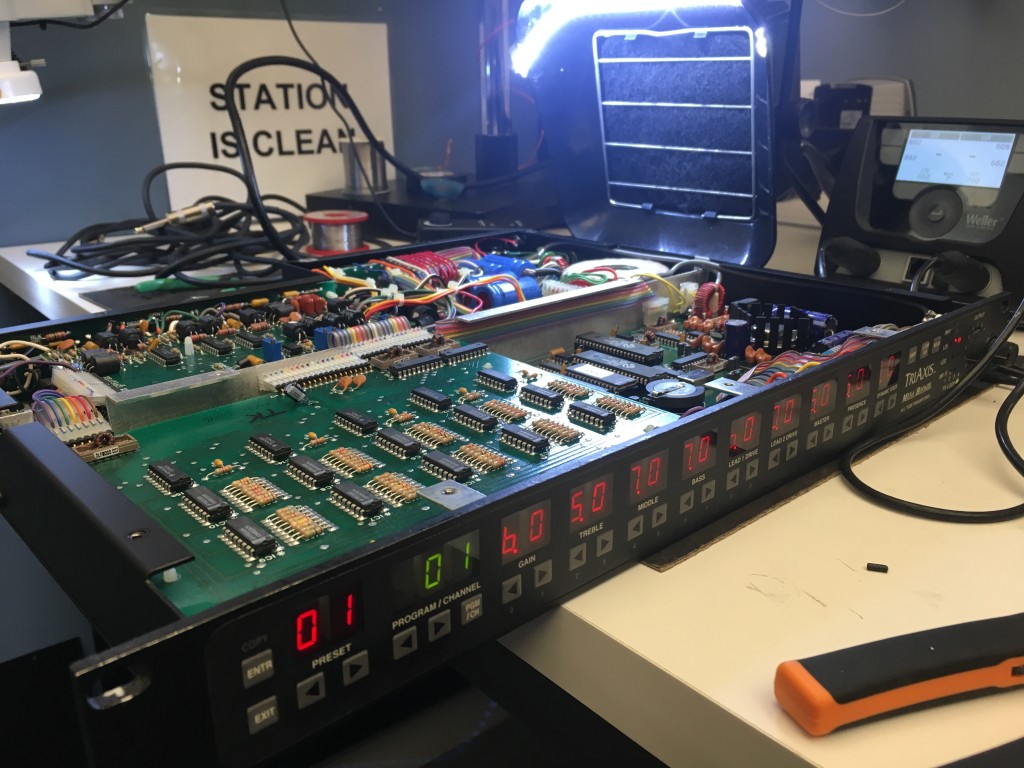 The beast has been running fine for 2 weeks, and my colleague is happy!