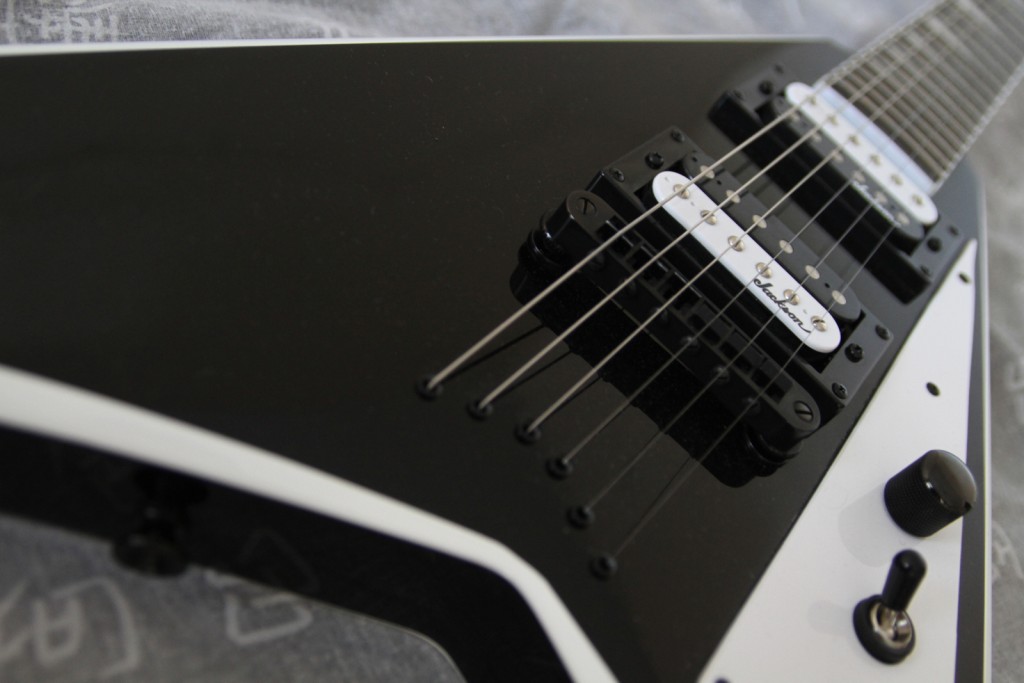 Living in an apartment and now playing the guitar with no other purpose than emptying my head when coming back from work, I play unplugged most of the time. And also because everything sounds desperately flat now that I don’t have my all-tubes Engl head and the gigantic cabinet it pairs with.

In my opinion (that’s a huge topic of discord apparently), when you chose a solid-body guitar, especially with entry level ones where woods are much more uneven, one of the most important thing is to pay attention to how the wood sounds. Stevie speaks about it much better than me here:

The idea is that, if the guitar sounds great unplugged, you will hear it when using the pickups (hello sustaaaaaaaaaaaaaaain). I had a high end guitar with shitty woods, I can tell you that no matter the electronics you add or the amp you plugged it in, it was deeply frustrating to listen at and play with.

So, here I am with an affordable and nicely built guitar. Agreed that pickups seem to have asthma, but that’s totally fine for my needs. I’ll buy Duncan Nazgul when I’ll plug it in something else than an iPhone.

However, the other day, ready to jam with a friend, plugging the beast for the first time in a while, no sound is coming out of the amp. Blaming the cables first, then the multi-effects pedal… Nope, turns out the guitar was the culprit. 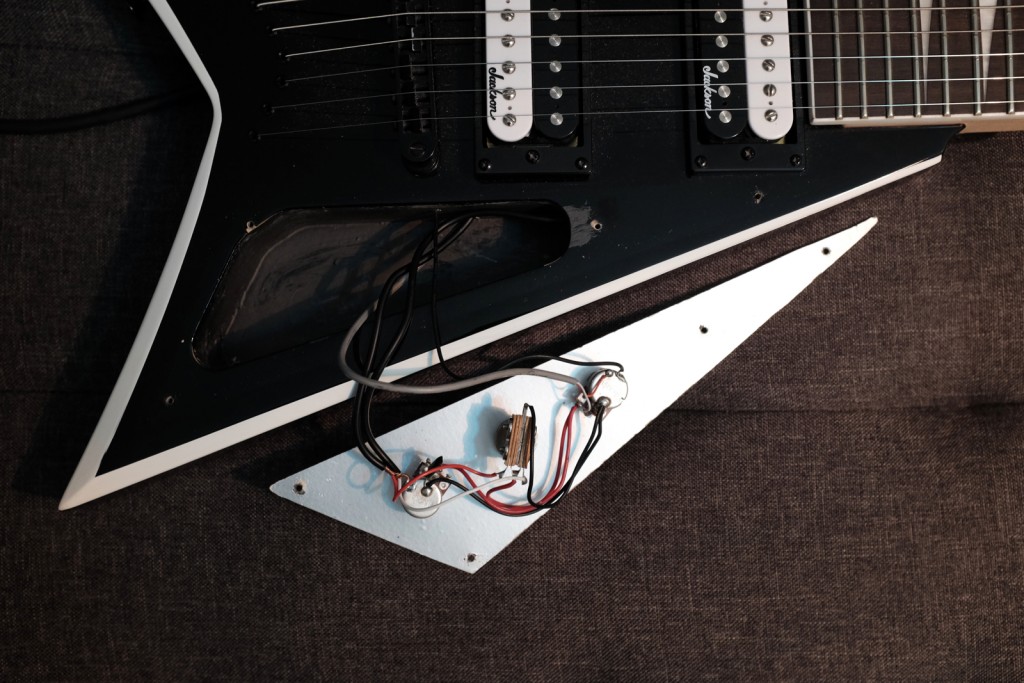 No shielding whatsoever around the electronic (agreed that there are some conductive paint on the back of the plate, for what it’s worth…) or in the cables since the shielded braid is not connected to anything, an impressive number of ground loops (I can’t see where to add some…) and some soldering that are quite frankly disgusting. By the way, the issue seems to be related to one of those cold solder joint, also known as “look likes it’s soldered but nope”, on one of the wires connecting the jack connector to the volume pot. I’m mentioning this kind of problem on my blog post where I build my own speaker cabinets.

On the bright side, switches, pots and wires seem decent (the cable from the jack connector is a double wire shielded, even though it’s used completely wrong). And as pickups don’t allow to be split as single coils, there’s no need to throw the current switches away for push/pull ones.

I quick-fixed the solder and played for the rest of the night happily, although OCD-Landry knows it will be tough to sleep without taking care of that soon.

A few days later, here is my guitar back on the surgery couch. I miss my workshop.

Mom being on another continent, let’s forget about gold leaves, and my painting skills all considered, I’ll go with the copper tape. 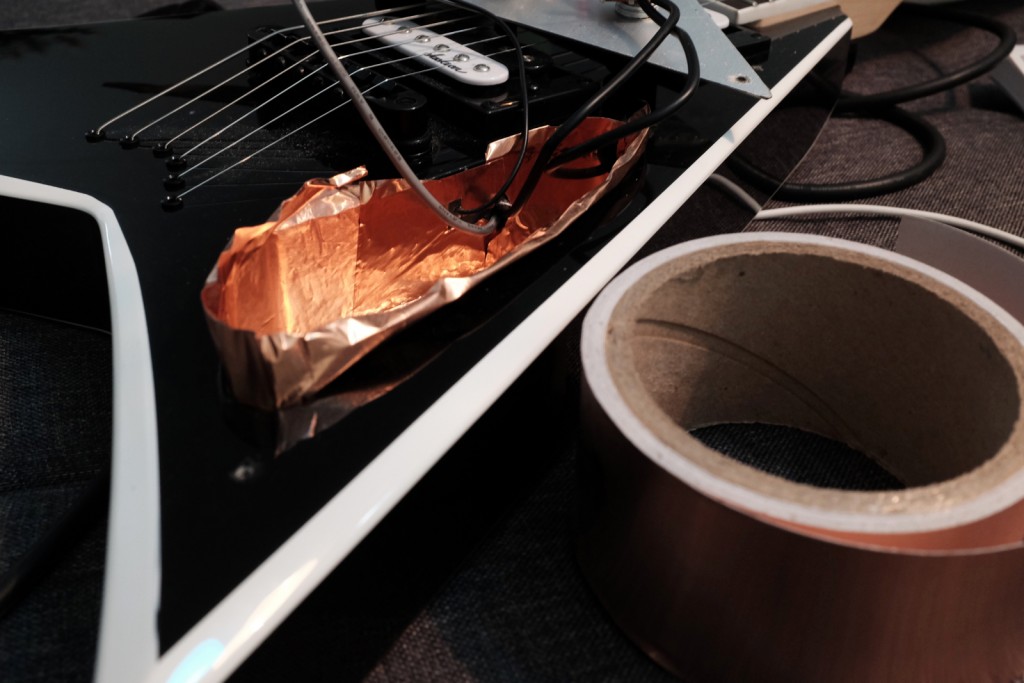 Nothing too difficult here, except paying attention not to slice your fingers with the copper edges (been there done that, in an attempt to increase the value of my guitar like the JEM Y2K).

Also, let’s not forget to have some copper covering one (and only one) of the screw hole, so that the existing shielding of the plate can be connected. Note that it would have been better to do that on the screw at the center of the plate, but that will do. 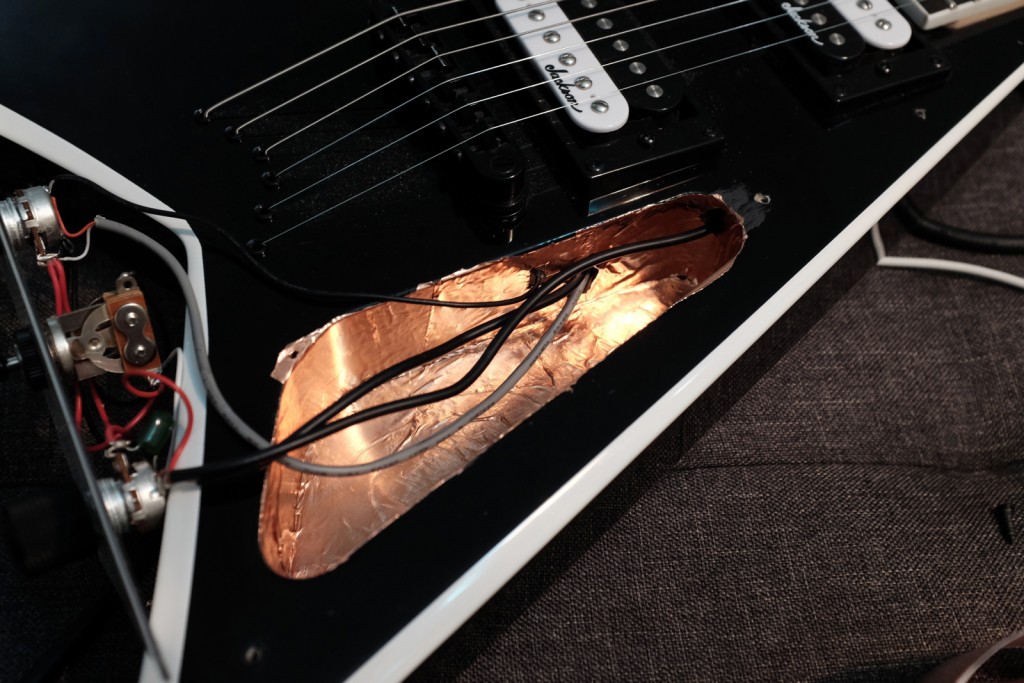 The guitar is equipped with passive pickups, so the signal going through this wire is very weak, and is thus very sensitive to noise. That’s why it’s mandatory to use a shielded cable, with some braid around the signal wires.

One can use a single wire cable, and use the braid for the ground. That’s how 99% of guitar cables on the market roll, but such cables behave as fancy low pass filters.

This amazing article (in French sorry) details everything much better than me.

That’s why it’s better to use cables made of 2 identical wires with an independent braid shield. Lucky for us, that’s exactly what we have here. However, the braid isn’t connected (and ground is the red wire here, confusing AF), and is thus completely useless: it must be connected to ground. Beware, it must be connected only on ONE side (floating ground)! If the braid is connected on both side, congratulations you just made another ground loop, that could induce some humming if both side are not at the same voltage.

Agreed that in our case, on a 5 inches length, that’s nitpicking and I challenge you all to hear the difference with a shielded single wire cable. But everything’s already here so why deprive ourselves? 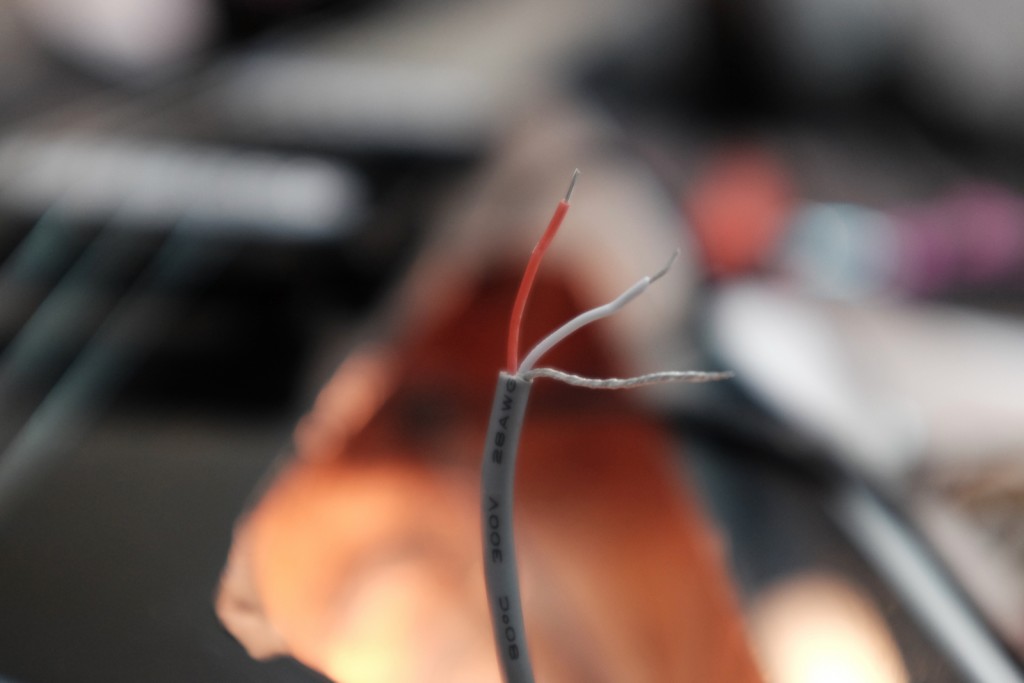 Last step, getting rid of all ground loops.

A ground loop is a circuit where current can take different paths to reach the ground. Audio people try to avoid that as the plague as it generates humming. To avoid that, we can either use the ground plan technic (one layer of the electronic board is dedicated to ground only) or the star-shaped pattern (where all ground connections are done on a single point). Here obviously we’ll go for the star-shaped solution, the connection being traditionally done on the volume pot case.

The circuitry goes from this: 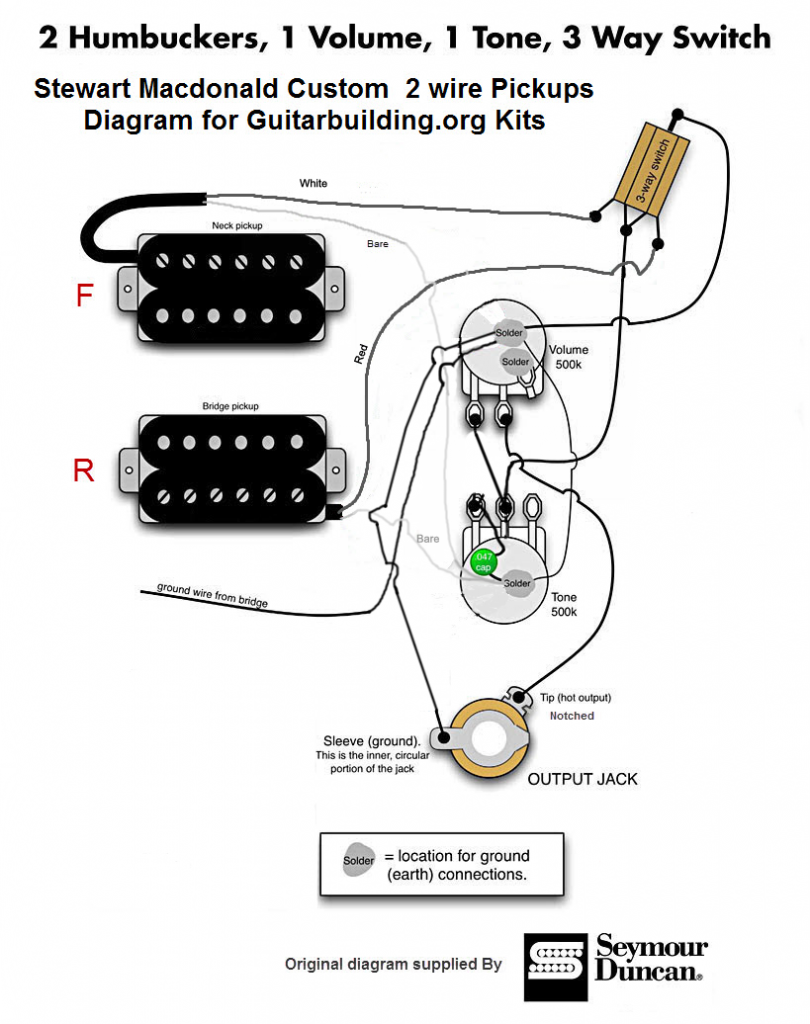 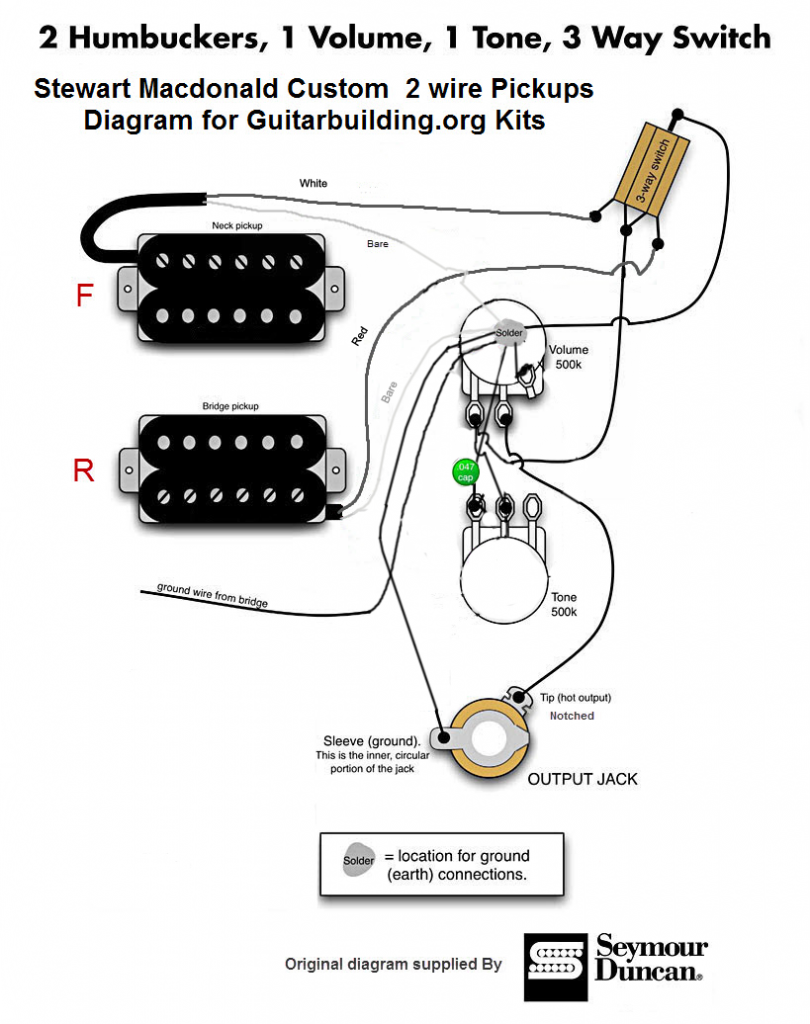 Practically, it’s recommended to remove all switches and pots, as the soldering temperature will likely melt the plastic plate. Be careful not to use too high a temperature when soldering (I usually go for 370 °C, but it depends on the solder you’re using, if it’s lead free you need to go higher), or to stay on a solder for too long, especially when soldering the pickups. I advise you to solder them last.

Putting everything back together… 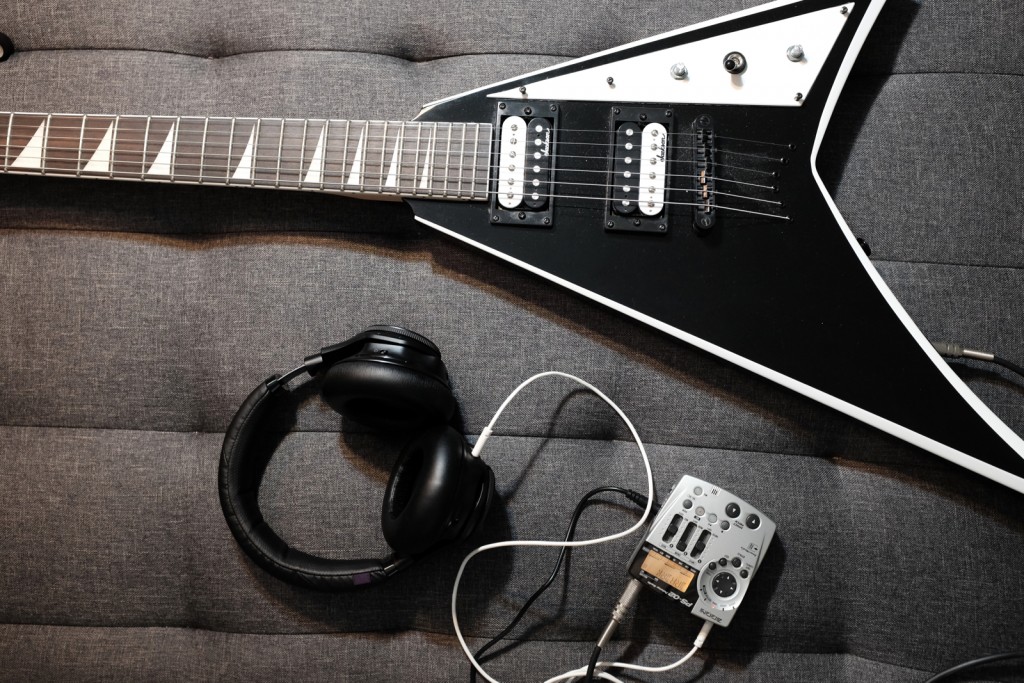 Despite all my efforts, no sound in my headphones.

Troubleshooting my assembly with a multimeter, it turns out that my volume pot is now dead, as it doesn’t shows the 500 kOhms I’m expected to see when cranked up. That means I’ll have to change it. Meanwhile, I just have to short it to be able to continue using the guitar! 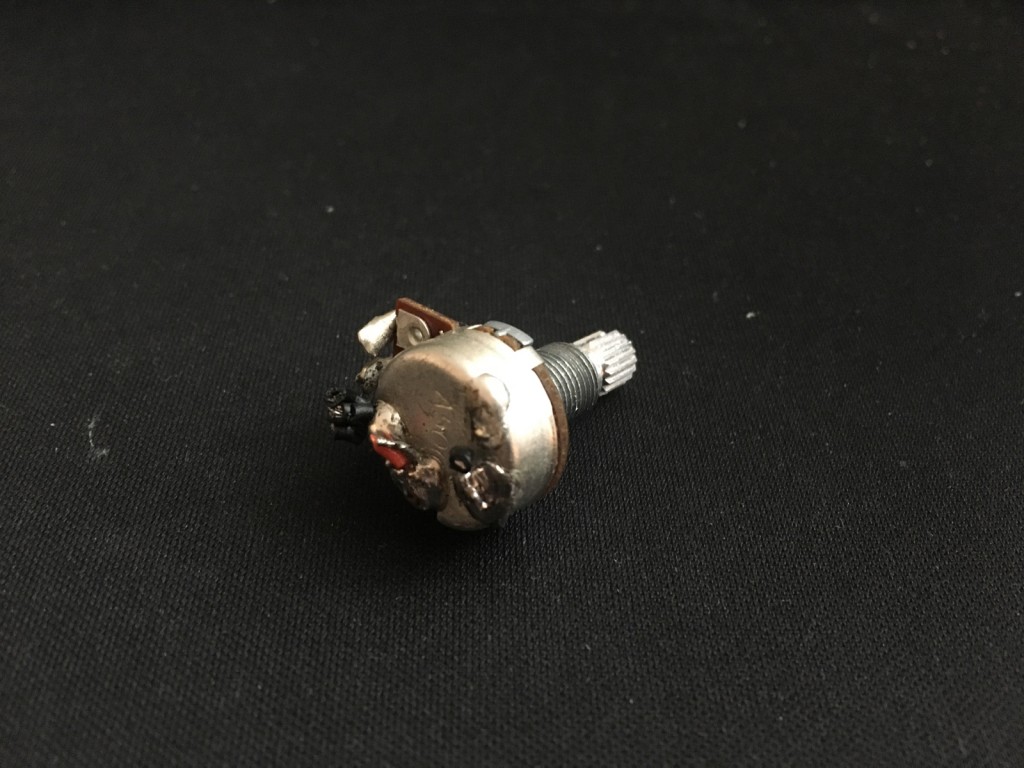 After a trip to Guitar Center after work, and several months of procrastination:

Here we go! A reliable and hum-free guitar!