After a while traveling only with public transportation and on my singlespeed through the power of my calves, it was hightime to surrender to the fantasy obsessing me since I arrived in the U.S., and to eventually buy my dream car…

That’s right, I’m cheating on my Italian car, but while I’m in a country where fuel is half the price I’m use to, and since Dodge cars are not being distributed in France, it’s now or never. 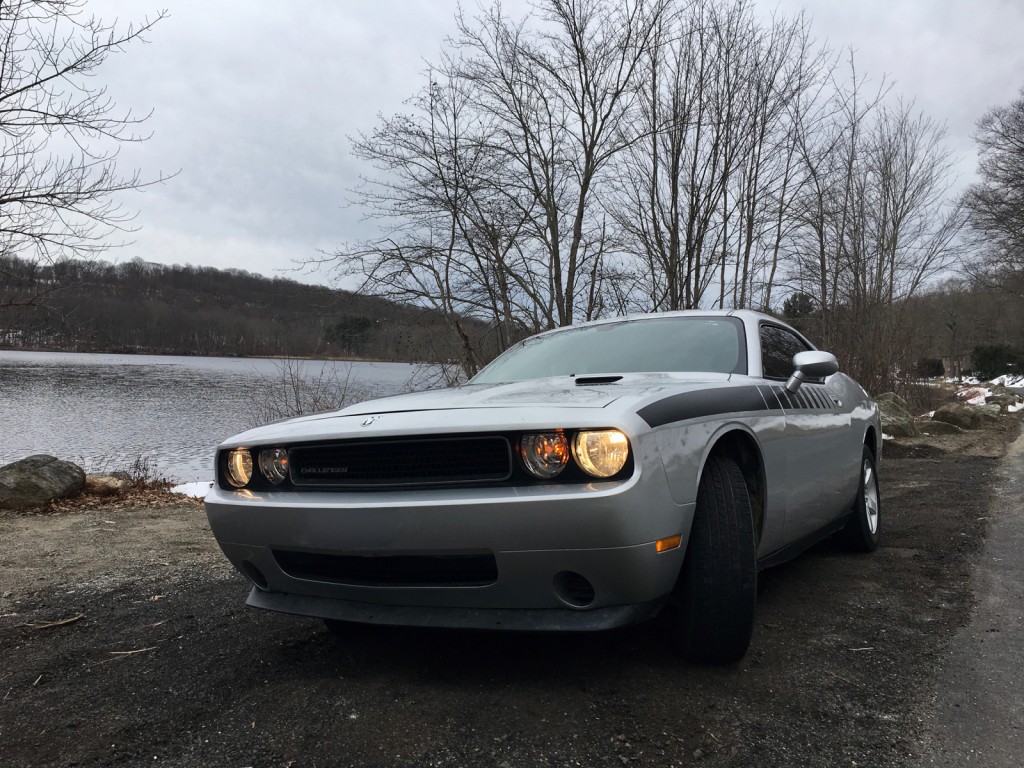 But let’s not get crazy, so I looked for a used one, from 2010, since I like the design better (dat ass <3) than the new ones. To be honest I also can’t be rushed too much with features from the future such as wireless keys, as some friends already know. Well, my Challenger is well named, because it’s indeed a challenge. She really needs some love and care after being that neglected for years. People are unbelievable.

After this endless introduction, here is today’s challenge.

Of all the Dodge Challenger I’ve tested, Dodge really screwed up the armrest, because the latch holding it in place was broken every time. Ok, we’re talking American muscle, not ergonomic desk chair. But hearing a “clang” at each pothole (and there are like A LOT here), because the lid doesn’t close tight, tends to be irksome. Searching on the Internet, the replacement part seems to be around $300 with no hint if it’s compatible. So people usually reclaim springs from pegs, or hold the armrest during the whole trip. Lucky for us they only sell that car with automatic transmission so you have one hand free.

You’re starting to know me well if you’re following that blog, nothing some 3D printing can’t fix!

After tearing the armrest apart, I started prototyping. On the stock part, the spring seems to be provided by a plastic flap under the latch. It should then be easy to make a plastic replacement part. Also, there’s a screw nearby fitting in a blind hole, which will be perfect to hold the new part! Better, it should be possible to simply slide the part under the latch, clipping it and locking it in place, removing only a single screw. No need to tear the armrest apart!

After an hour or so, I’m playing with 2 possible designs. One is a little more expensive because bigger, but it can fit even if the original part has broken in an unexpected way. The other one is smaller and should behave as a stronger spring. Let’s not postpone any longer, I send these files for printing and wait for my order, rocked by the CLANG CLANG of my arm rest reassembled. 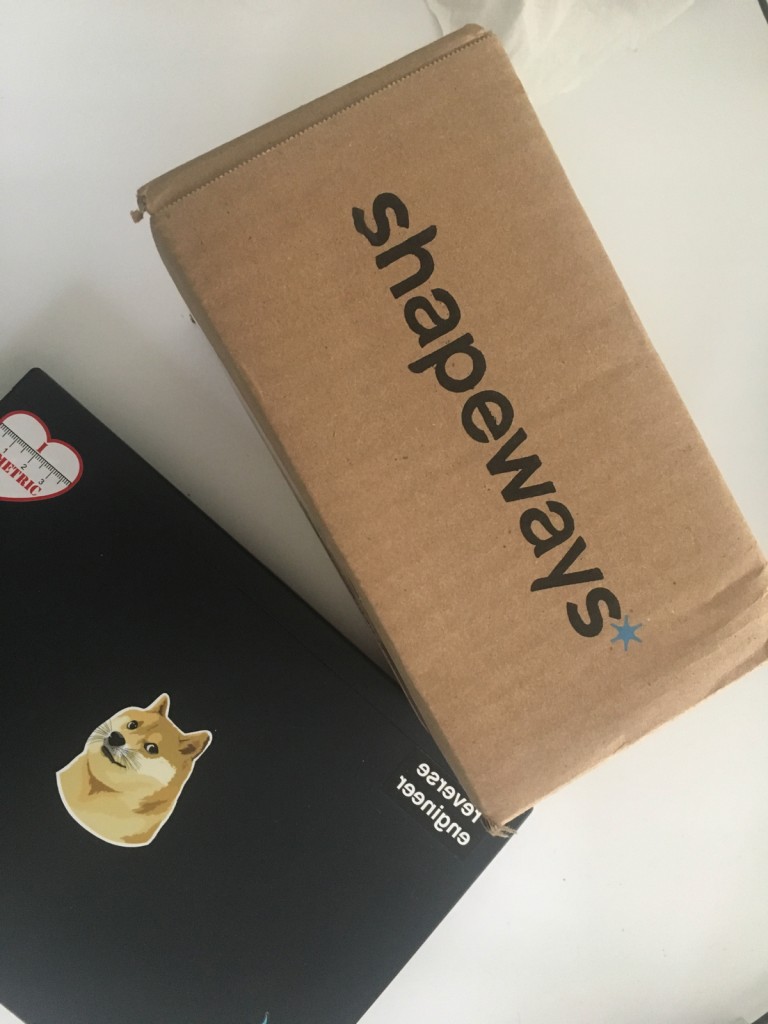 And when I receive the package, without surprise, there’s a wee bit of disappointment. 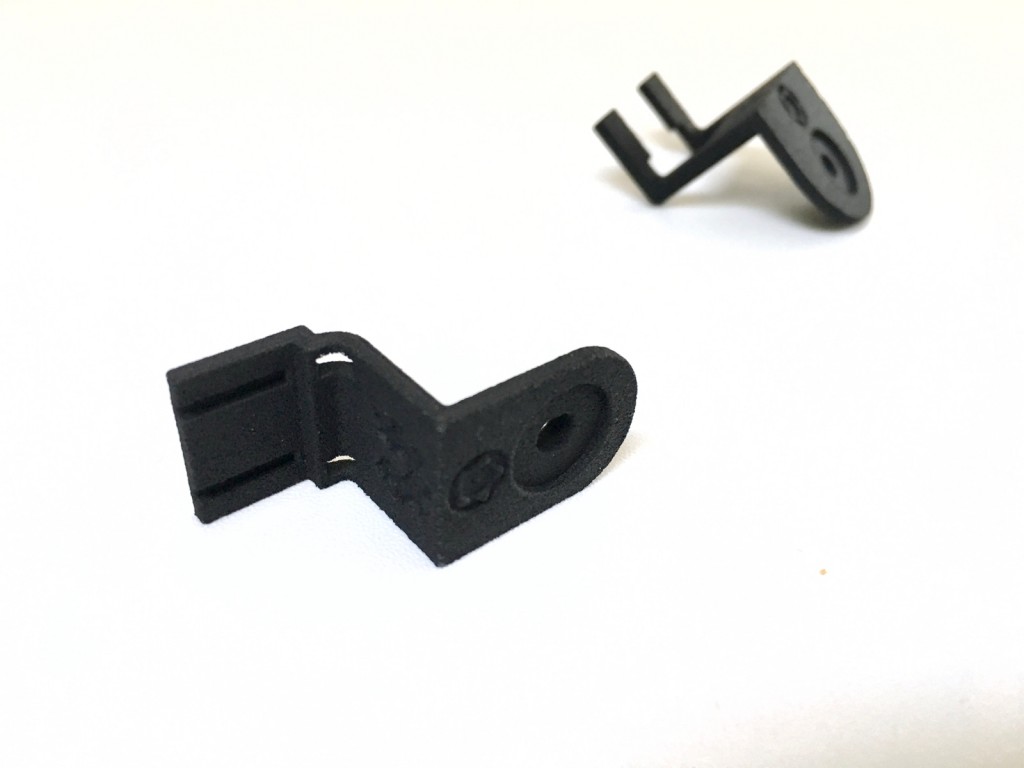 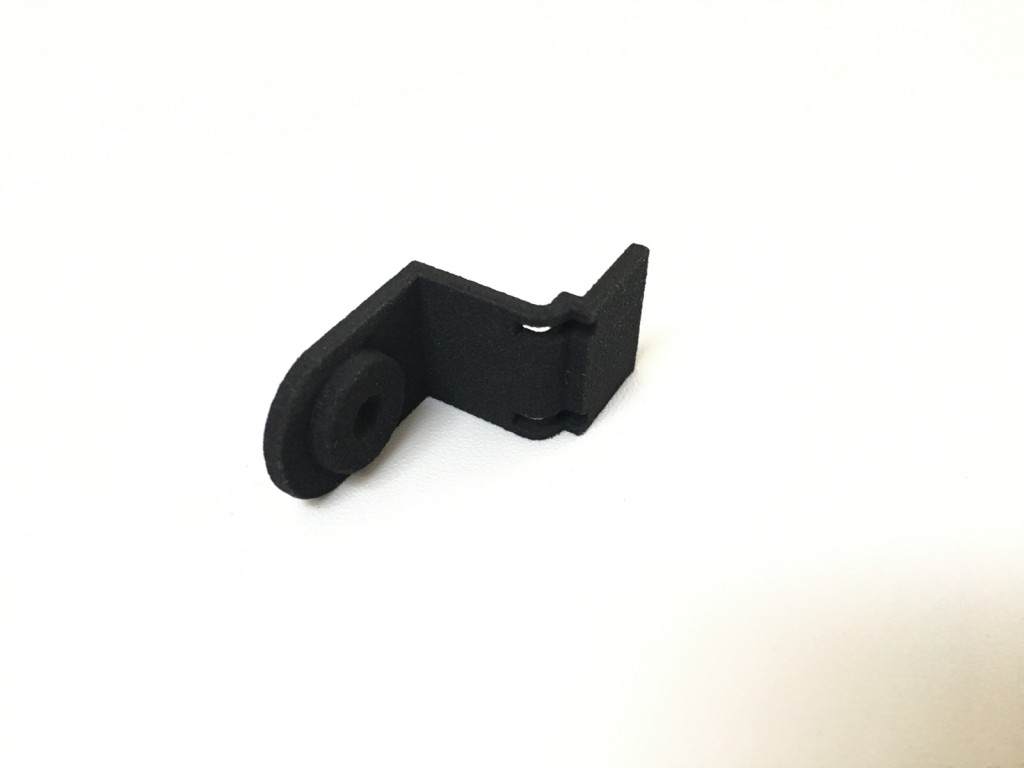 Detail of the reverse side 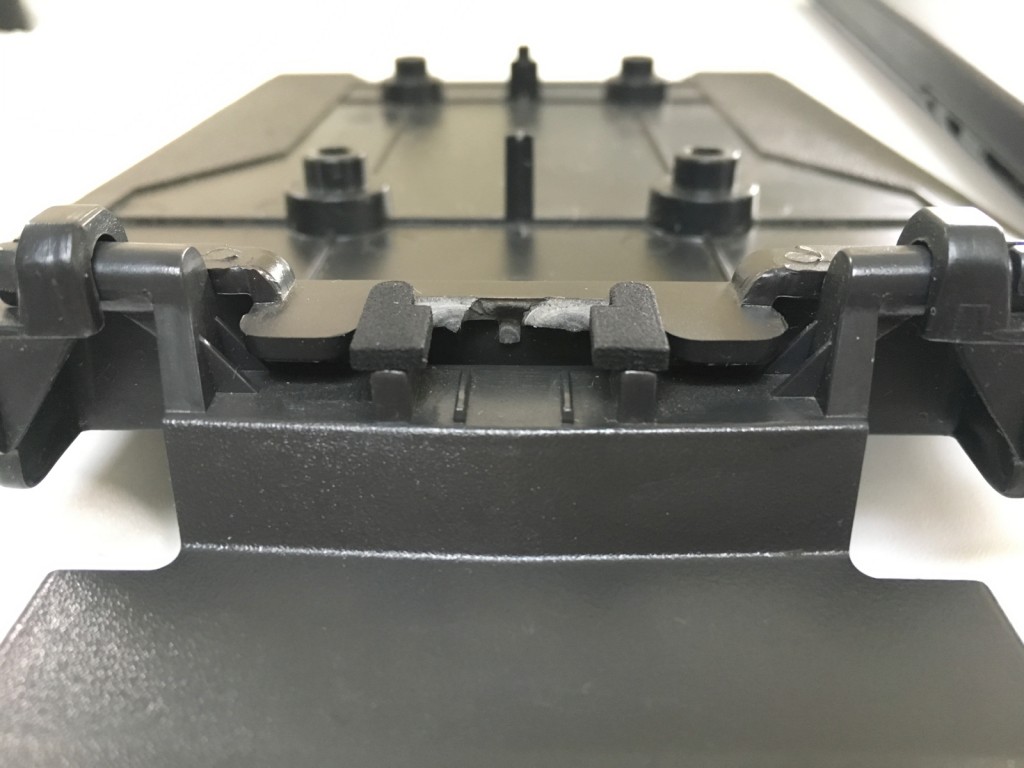 Detail of how the big part acts as a spring on the latch, on the inside. 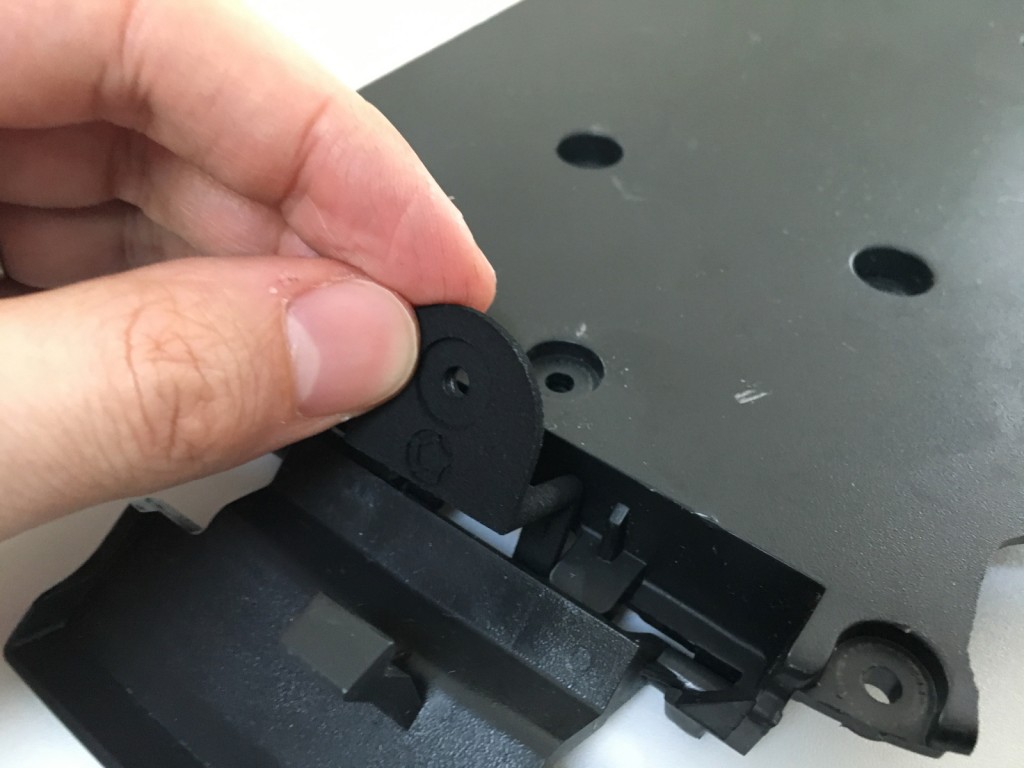 Once the nearby screw is removed, simply insert the new spring part in place and clip it in the blind hole.

Measurements are accurate, parts fit well but… the spring effect is a little weak. And the smaller part is in fact not resting on the latch at all, because I didn’t considered the looseness in the latch axis.

Also, it seems that the hook itself is a little worn out on my Challenger, and the smooth surface of the plastic doesn’t help the grip.

Let’s face it, a new iteration is mandatory. I readjust the design of the smaller version part, extend the spring flap a little. I also do another iteration of each version with an angle on the flap, so that the spring tension is stronger on the latch. 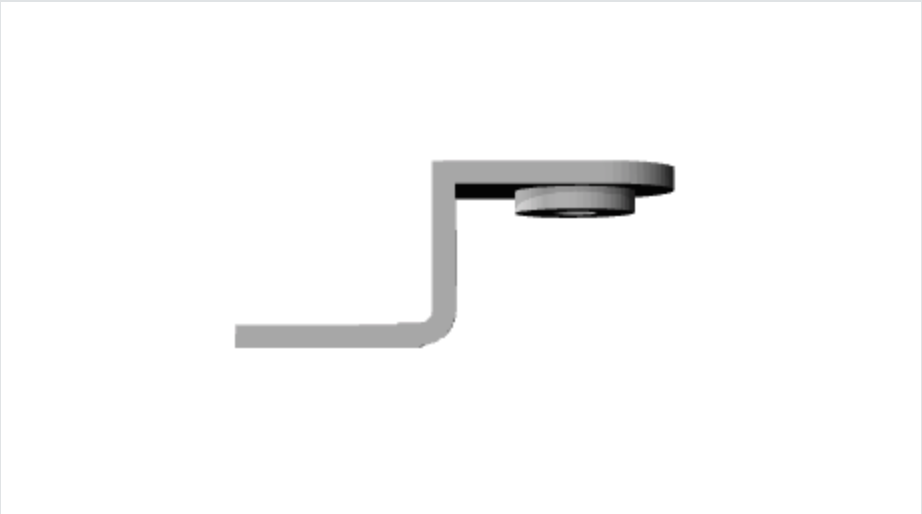 Without angle on the flap 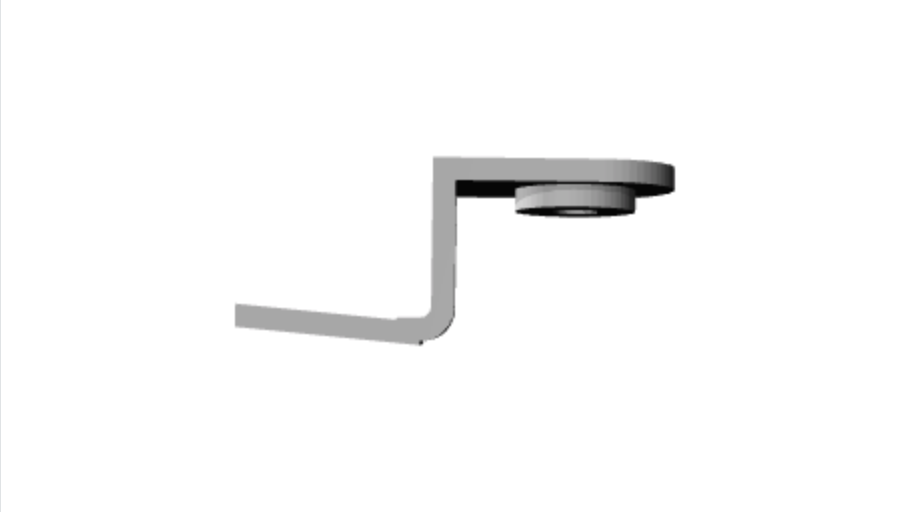 Modified part with some angle on the flap

Finally, I also design a small shell for the hook, that will add some thickness, grip, and extend the reach.

I confirm my new order and meanwhile, I hack one of the current parts with some plastic packaging leftovers and hot glue. Clearly not ready for resale but it will bring enough peace of mind until I get the new parts. 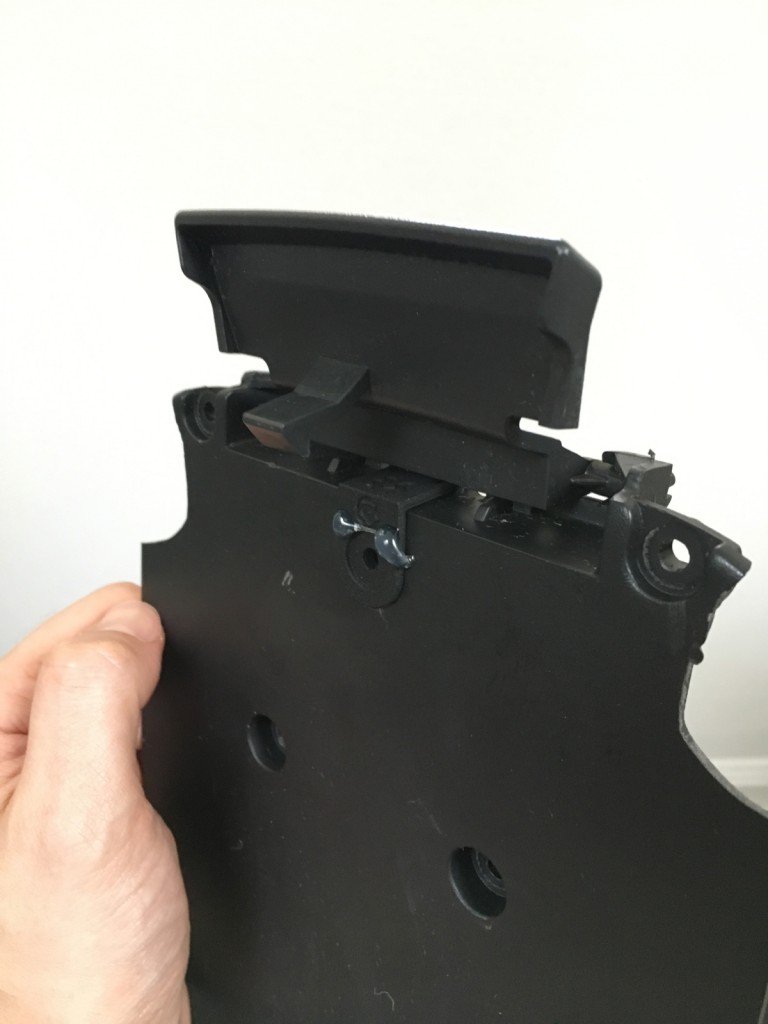 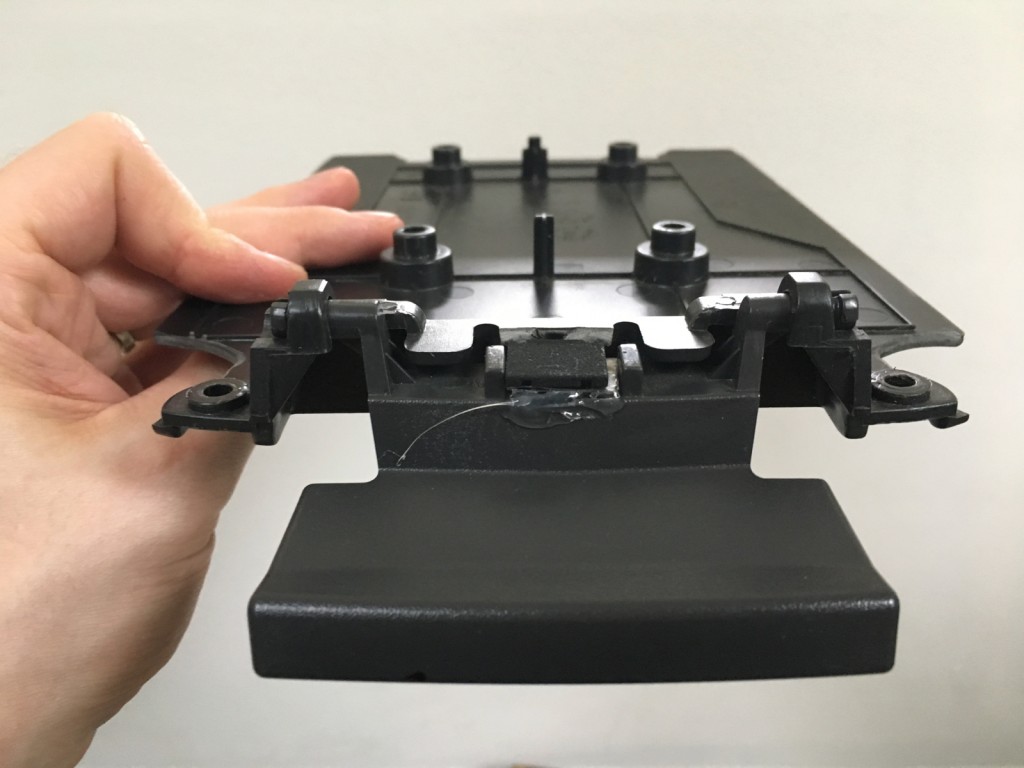 When receiving the new batch there’s again some disappointment with some parts, but one is really good!

Because of the printing orientation, I have the perfect smoothness on the surface with the logo. It was good because I had only perpendicular faces in the previous design. Unfortunately, I didn’t think about the printing resolution, and the side with a slight angle ended up with a nice stair finish (#pixelart). Bummer, since the surface needs to be smooth so that the latch slides on it. That would mean reworking each part by hand (not what I want for other potential users) or change the printing orientation of the part, but the rest of the part will suffer from the same stair pattern. Let’s throw it away. 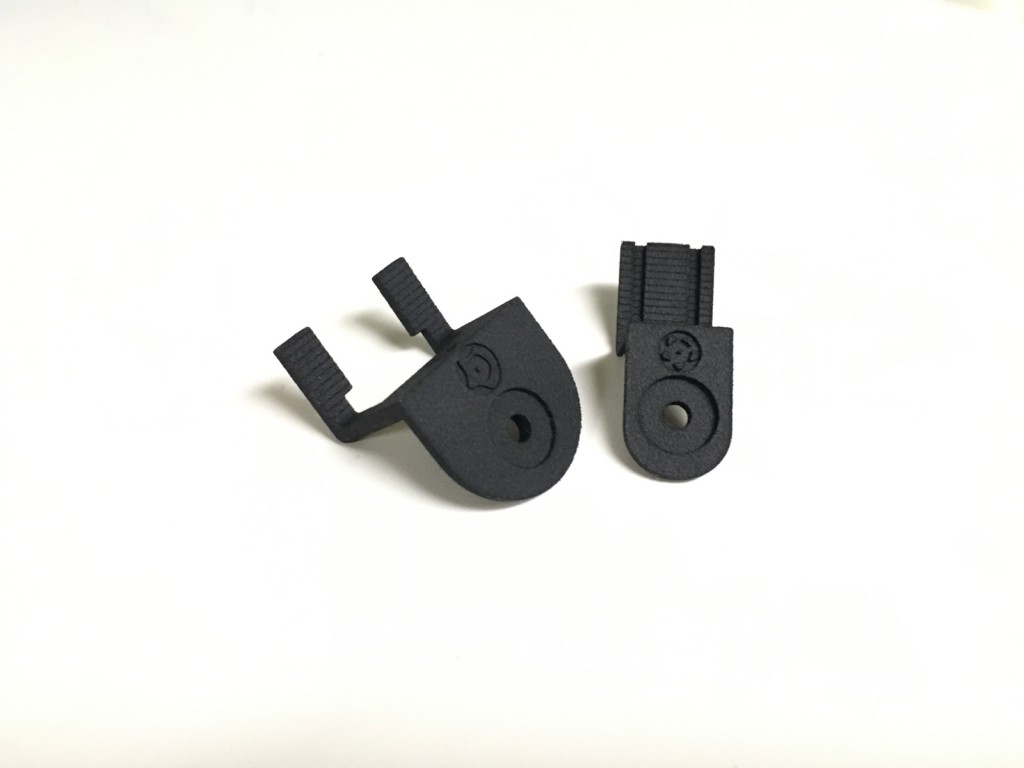 Those parts show a stairs pattern because of the printer resolution not smoothly reproducing the angled flap.

However, the smaller part, reworked, without the angled flap, turns out to be a perfect fit. It’s very easy to install, and the spring is just enough to have the latch moving back and forth as expected. 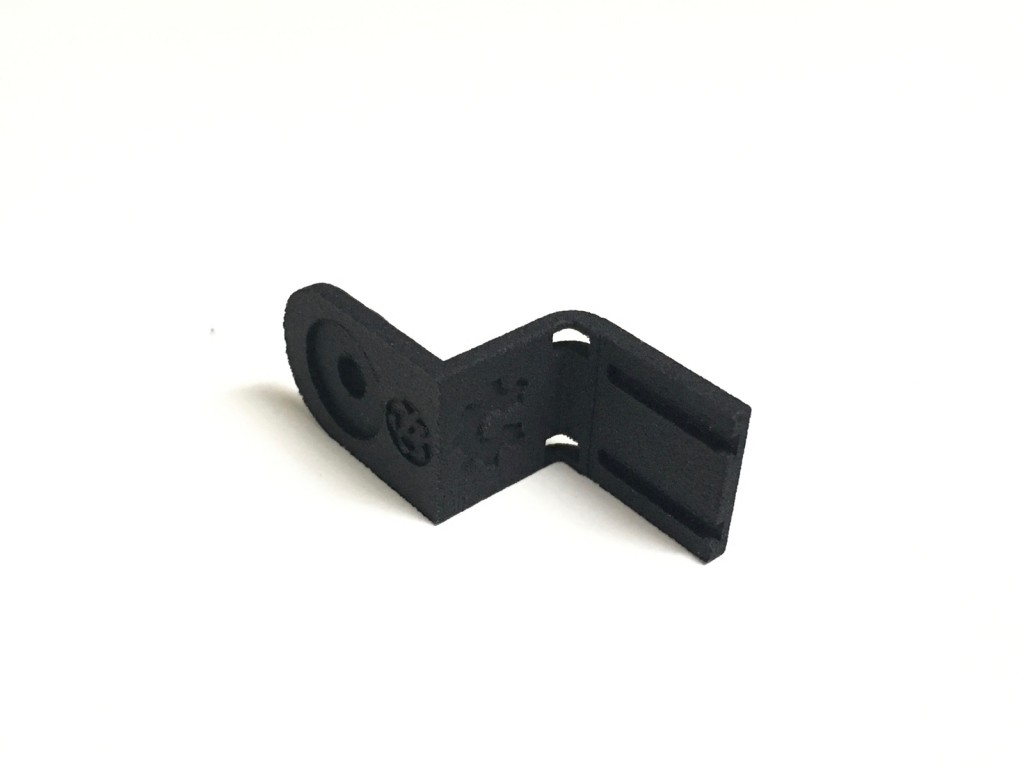 Final version of the latch spring.

Finally, the hook shell (if you come with a better name let me know!) perfectly slides and holds firmly on the latch hook, despite my doubts concerning my measurements. 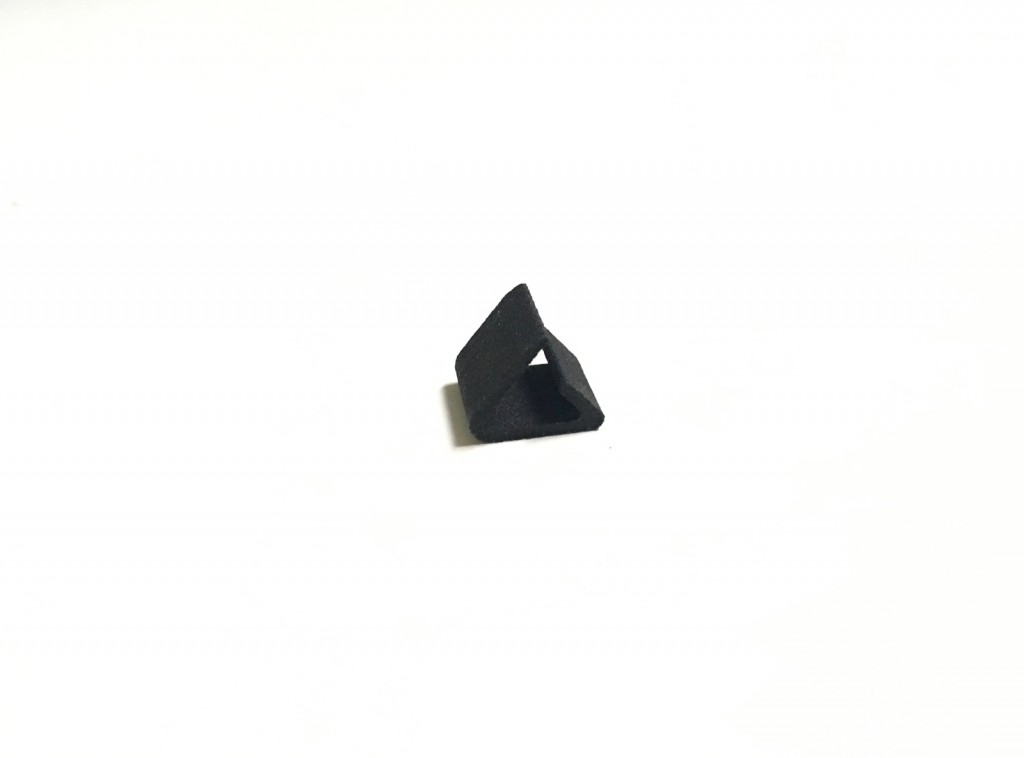 Final version of the hook shell. 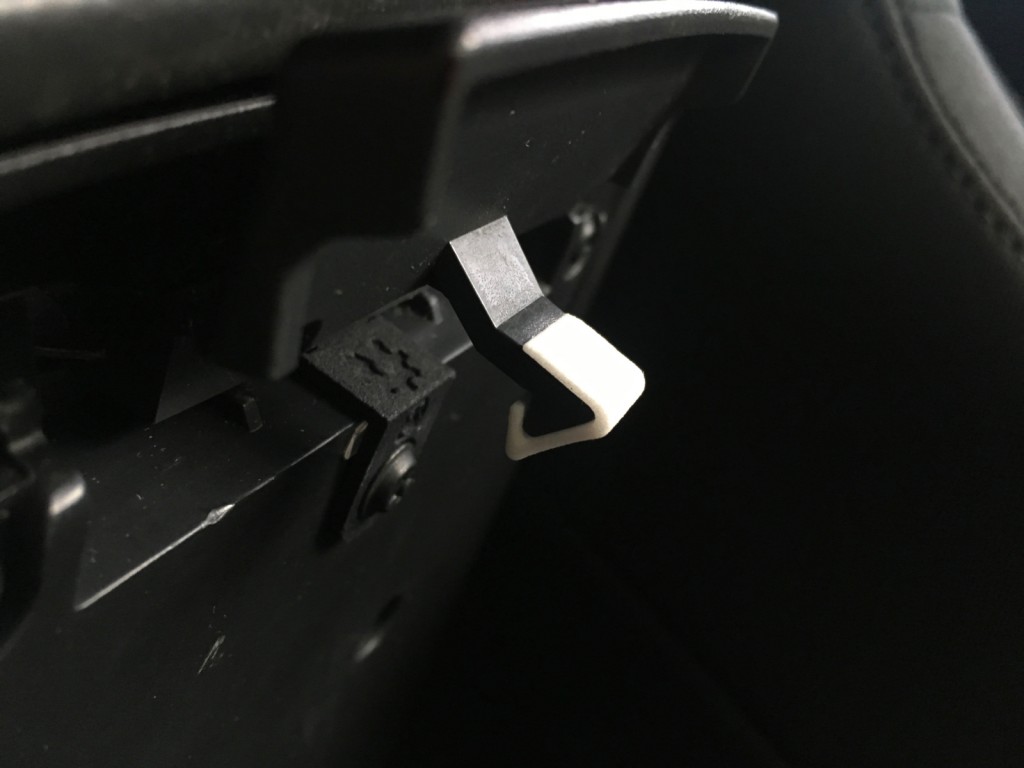 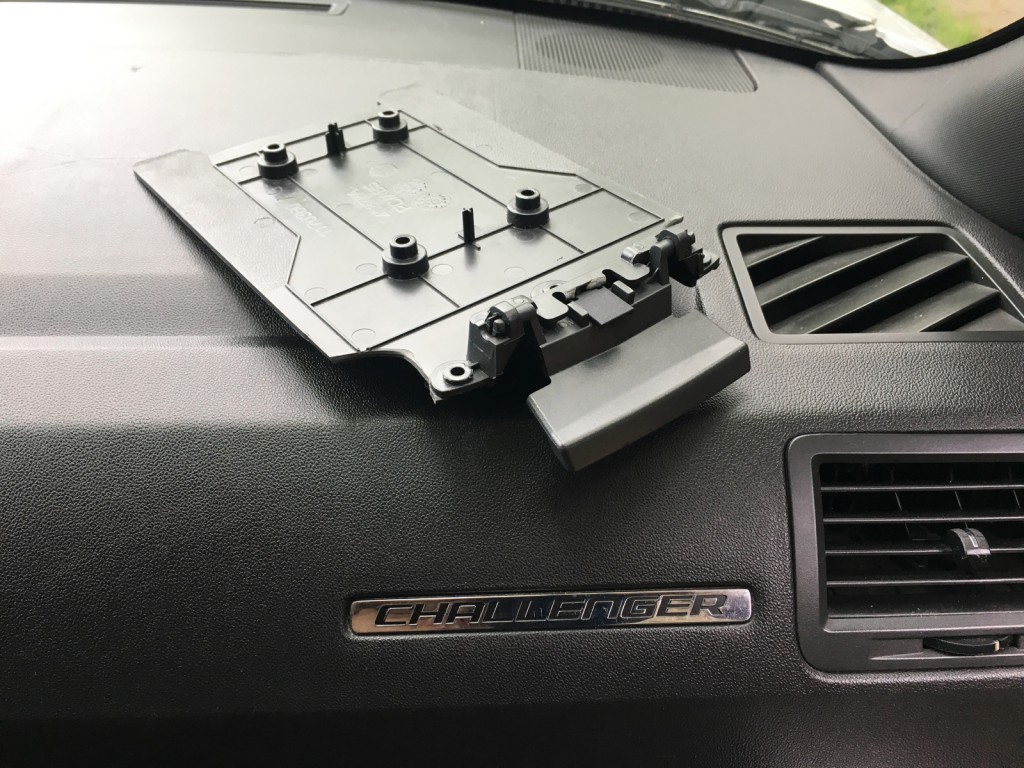 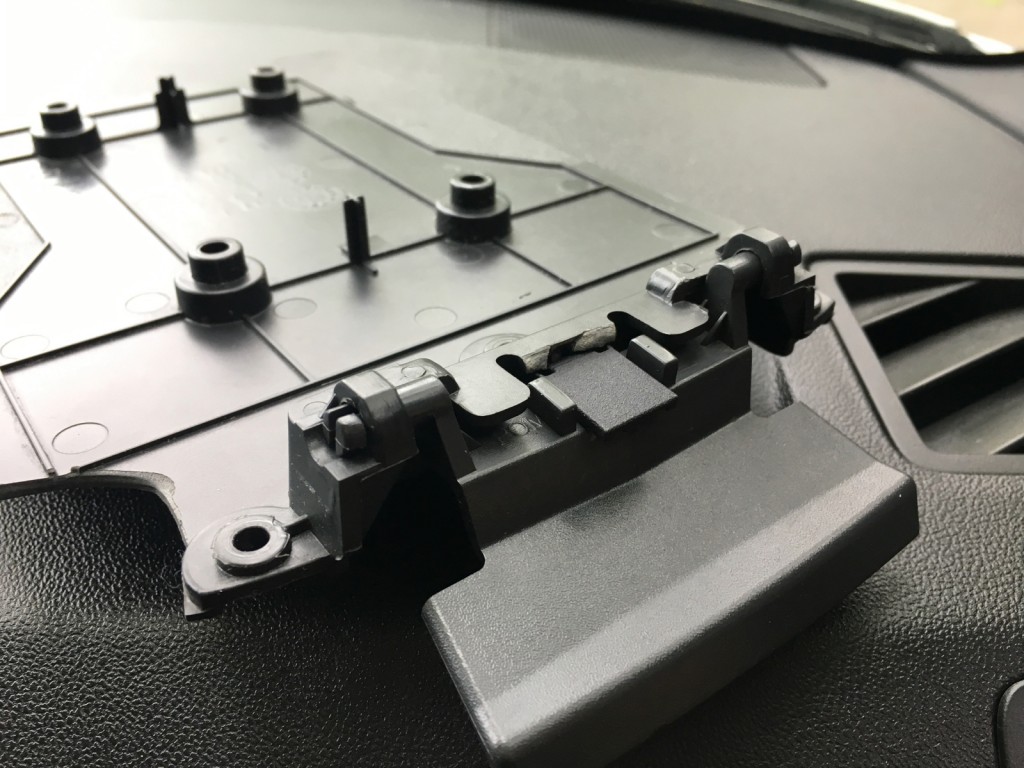 Spring installed, inside view, close up. 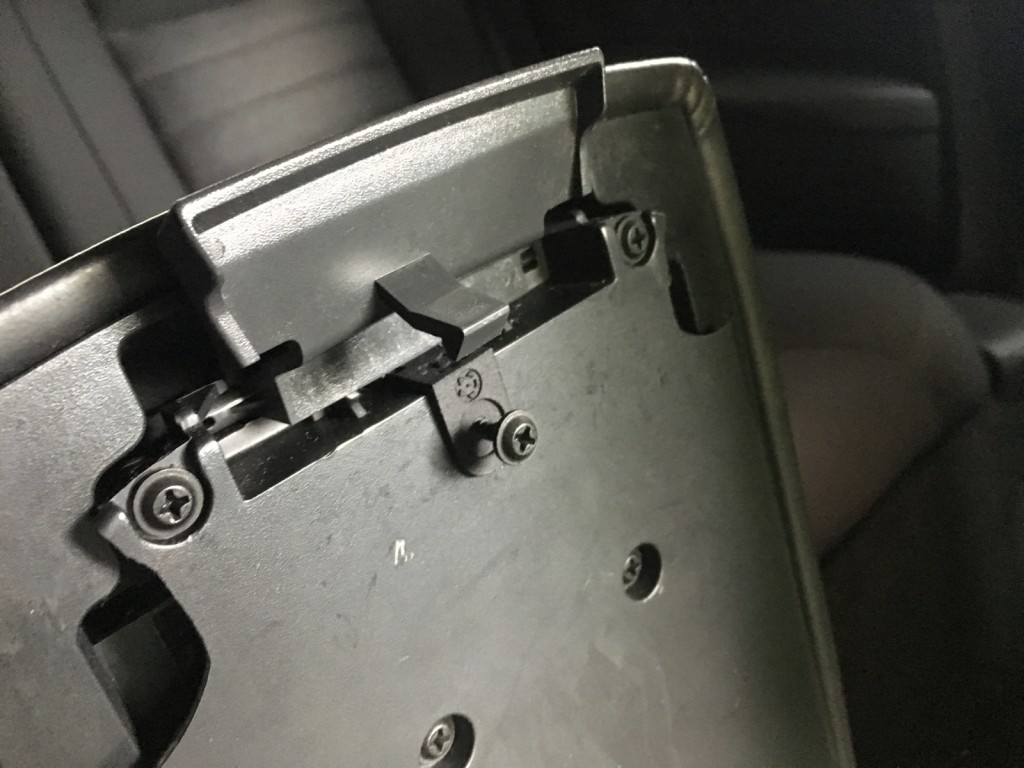 Just a screw to put back in place to complete the install. 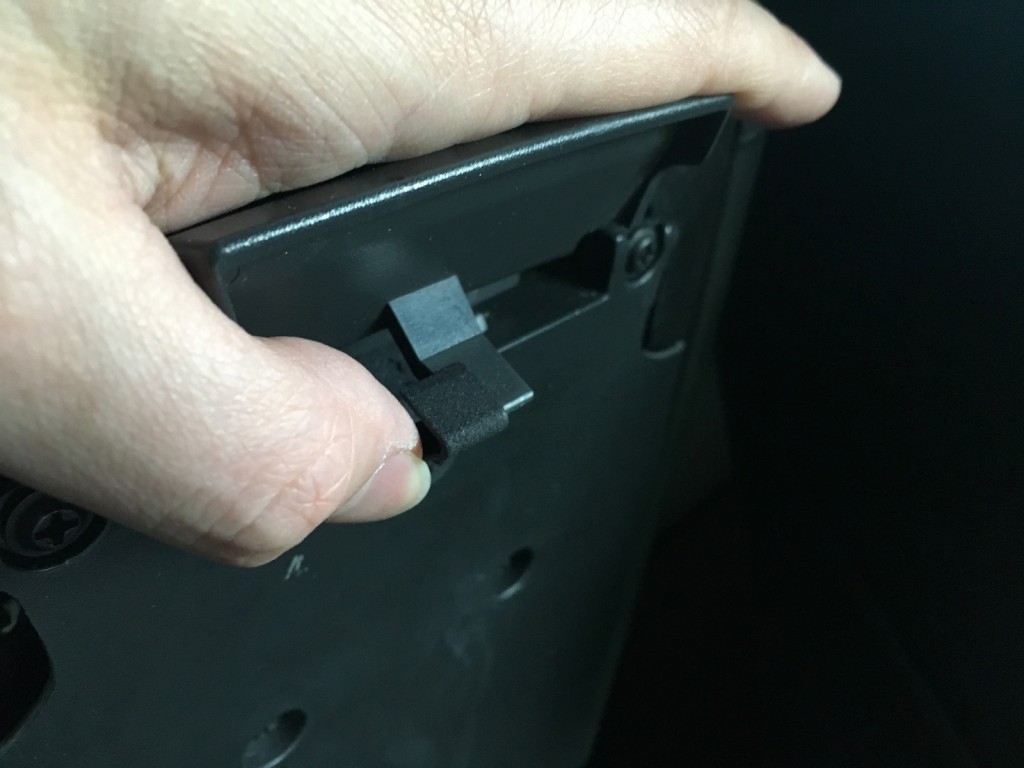 The shell simply slides on top of the hook. 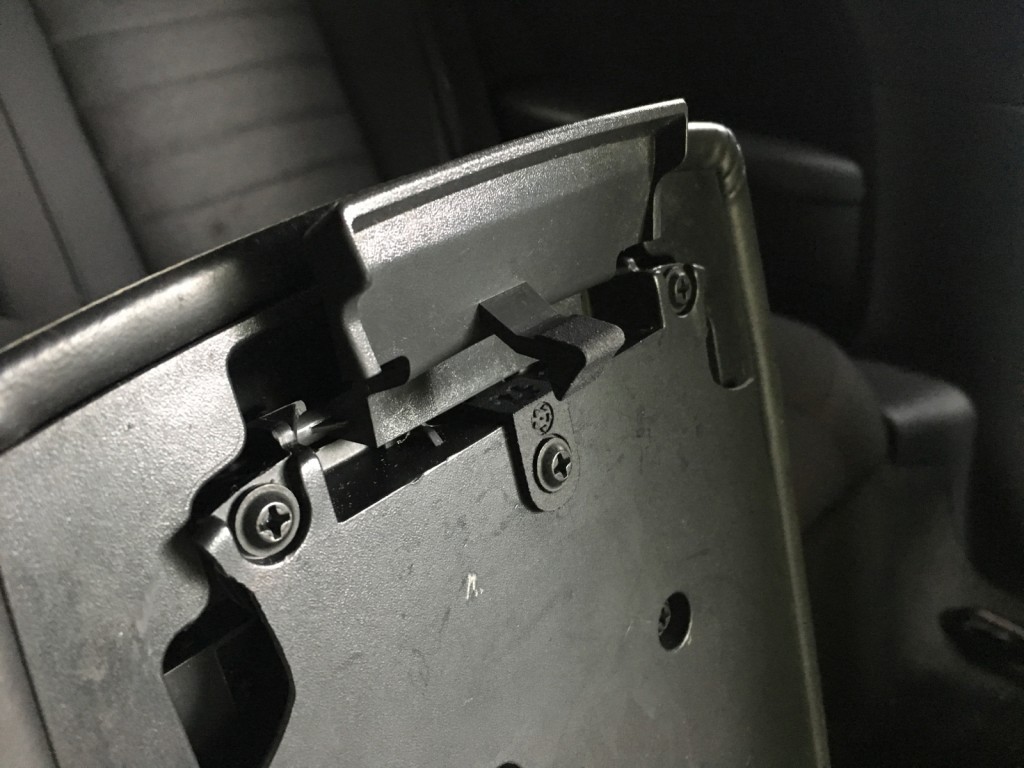 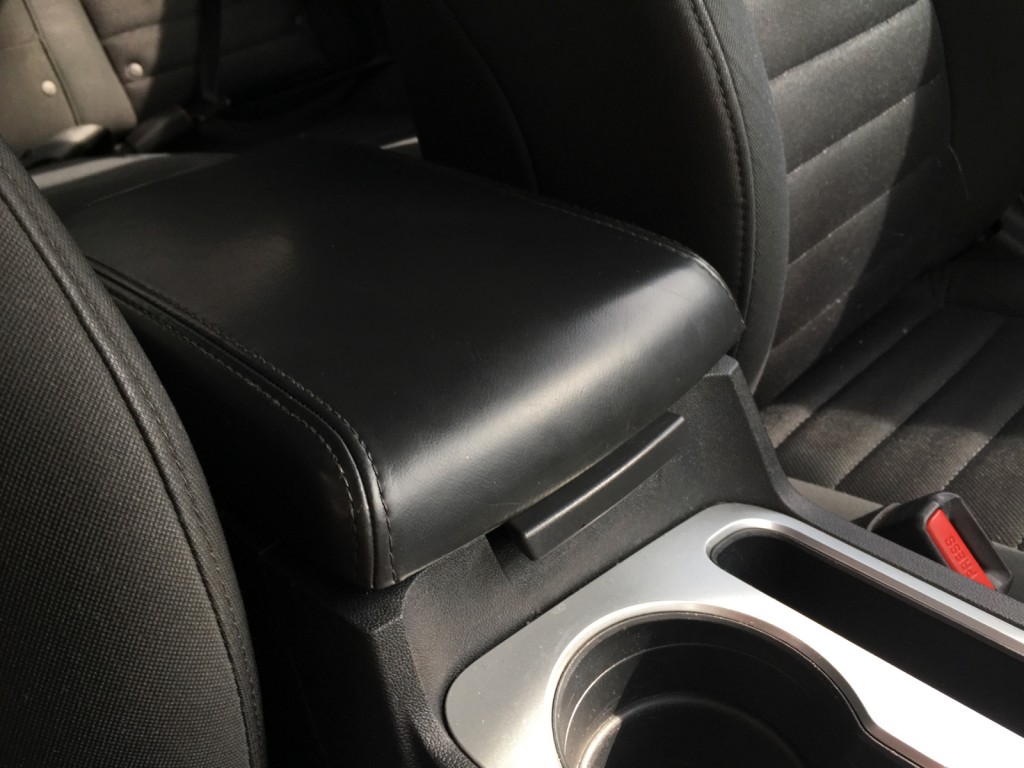 And that’s it! I’m now driving silently, unless I floor the throttle of course, but the armrest has nothing to do with it. And as I’m sure I’m not the only one in this situation, these parts are available under OSHW licence 🙂 That’s right, you can download the STL files (files updated on July 8, 2018) and print those yourself… Or order on my Shapeways shop if you’re not sure how to do, or want to support me <3 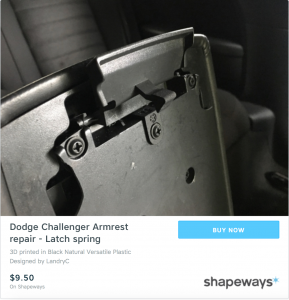 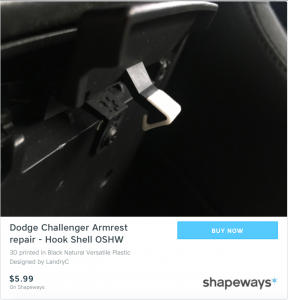 Edit of July 8, 2018: I updated the STL file with the hook shell V2 which definitely improves the locking of the lid.